A complexity of an algorithm state, how fast the algorithm is (how many elementary operations are performed) with respect to the input data set. For algorithm classification is usually used the so called asymptotic complexity. For every (asymptotic) complexity class it holds, that an algorithm from the previous class is for all input data greater than some lower bound always faster than an algorithm from the following class regardless of the speed of computers used to do this measurement (one computer may be c-times slower than the other (c is a constant)).

To distinguish classes of asymptotic complexity we may use scale of powers. It states that when data size

What does it say? 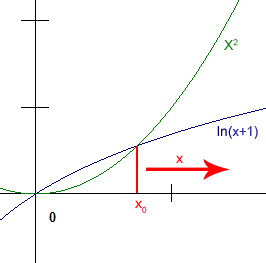 operations and the second

, than we may run the second algorithm on a machine that is twice as fast and we won't be able to notice any difference between them. But if one algorithm has a complexity

In simple terms: if two algorithms belong to a different complexity class, than there always exist an input of some length, from which will be one of the algorithms always faster regardless of the speed of both computers.

by a very small constant (e.g. 0.001), there will still exist an intersection of both functions (

), hence there will be some size of input, from which for all sizes of the input

it holds, that the algorithm with complexity

is always faster. By modifying the multiplicative constant we only move the intersection along the x-axis.

How the asymptotic complexity can be computed?

When analyzing most of the algorithms, we cannot determine exactly one complexity class, because the number of operations performed depends on the data itself. For example, we may say that the algorithms is in

, which means that the algorithm will never terminate in less than

operations, but on the other side its complexity is never worse than quadratic.

– Omega f(x) – algorithm always operates asymptotically equally as f(x). That means the algorithm is in

The inner loop of this algorithm – bubble sort – is performed

times, which is according to the sum of the arithmetic progression

operations. Because we are calculating the asymptotic complexity, we can omit the multiplicative contant. If the contained some additive constants, we would omit them as well. So the number of operations performed by bubble sort is

. Because this calculation describes both best and worst case scenarios, the asymptotic complexity is


Place for your banner