The two jars problem is a puzzle, in which the goal is to measure some amount of water using two (several) jars of different capacity and an unlimited source of water.

You have two jars, the first one has a 3 liters capacity, the second one 5 liters. You also have an unlimited source of water. Measure exactly 4 liters of water.

The graph will not contain any inner node, because we are able to precisely measure the water, only if we completely fill or empty at least one of the jars. 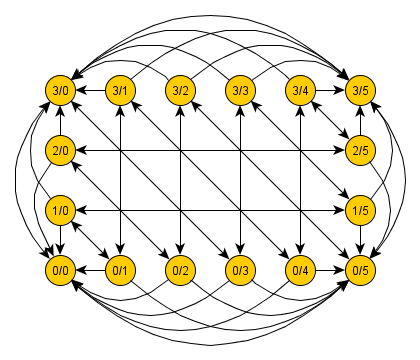 Graph of the two jars puzzle

Now we can use bread first search to traverse the graph starting at node 0/0. For every node, the procedure will store its predecessor. When the algorithm reaches the 0/4 node, it will terminate the searching phase and will reconstruct the backward path. 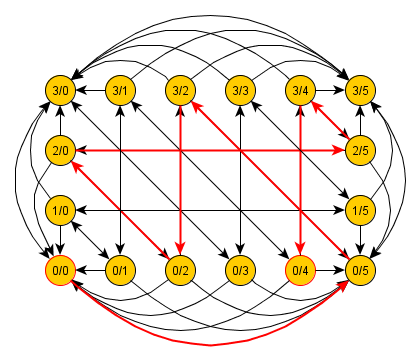 Solution to the two jars puzzle

Variants of the puzzle

If the operations performed are not equivalent – pouring water from one jar into the other might be considered as more difficult than just emptying one jar – than we have to assign costs to the edges and find the shortest path. To do so, we can use Dijkstra, Bellman-Ford or Floyd-Warshall algorithm.

The puzzle can also be generalized to any number of jars. The solution to this problem is simillar to the original one, we only have to construct the graph in more dimensions (equal to the number of jars).